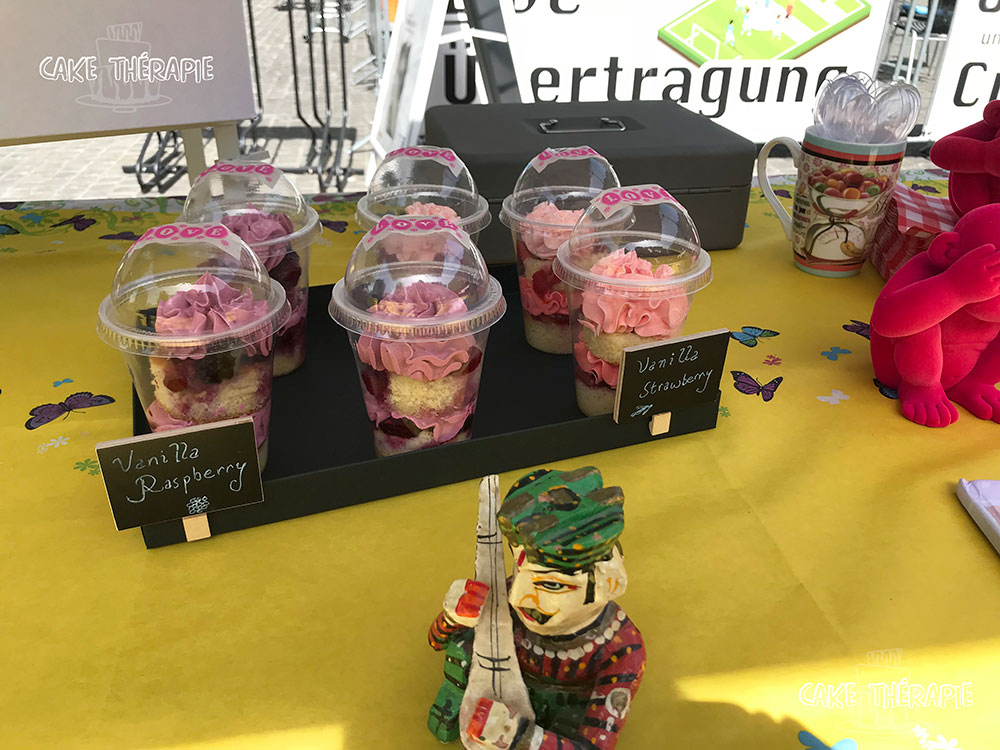 Cake stalls or bake stalls. An experience of its own kind. This would be my 4th Cake/Cupcake stall up until now and I will not deny that it still gives me the butterflies! Nervous energies and rush of adrenaline, starting from the day of registeration untill wrap up, that's one of the many thing that helps me survive this journey. Allow me to take you through 'the behind the scenes' of this lastest stall I put up on the 26th of May 2018 at the 'Fest der Indischen Kulture' organised by the Indian Association Wettingen.

As not to repeat myself again with the products, this time around I decided to do 'Cakes in a Cup' instead of my usual assortment of cupcakes. I had a fair idea of what I was getting into but at the same time vastly underestimated the time and effort this would cost! Well me being me (those who know me will know what I mean) don't like to keep it simple either! Once the flavour combinations were decided began the endless hours of baking sheets of Vanilla and Chocolate sponges in my small kitchen oven. Once cooled, I wrapped up them up as tight as possible in cling film and stacked them up in my cake fridge.

While the cakes rested, I went about the business of buttercream making. In the end I had made 4 batches in total, which involved cleaning of the mixer bowl and whisk after every batch of buttercream. Once the lovely frosting was done and set aside I set up my workspace as a factory production. Lined up the glasses, coloured and flavoured the buttercream for different flavours, chopped and set aside the fruit fillings. And ventured on to tackle on one flavour at a time. This is where I realised that up until now it was a breeze and this layering of cake, filling and frosting is gonna cost me lots of time, my back and my feet

Black forrest in the making in the picture below.

Chocolate Oreo being set up in the image below

16 hours later of assembling the cakes, I was ready to call it a day! My table looked like a sea of colourful cake and frosting. A very pretty sight indeed. A sense of accomplishment (along with an aspirin

) completely overtook and surpassed all that tiredness and exhaustion and it called for a well deserved good night's sleep.

The D-Day started early with a cup of freshly brewed coffee to get me going. All that remained was to set up the stall at the venue, display the wares and meet and greet all those who visited and showed interested. Only if it were as simple as that

. This time the weather God's were way too generous with the sun and heat and by late afternoon there was a mad rush to arrange for ice to keep the frosting from melting. In all that heat and humidity and panic I totally forgot to click pictures and only have a few from the morning just after set up. Just enough to give you a glimpse of the stall.

Yes I totaly survived the 48 hours of labour. And my lovely supporting friends stood by me the whole of Saturday in that scorching heat to make it a day worth remembering. Thank you to all those who visited from far and near. You guys totally made my day!

Would I do it again? Yes most definitely but after a breather for sure